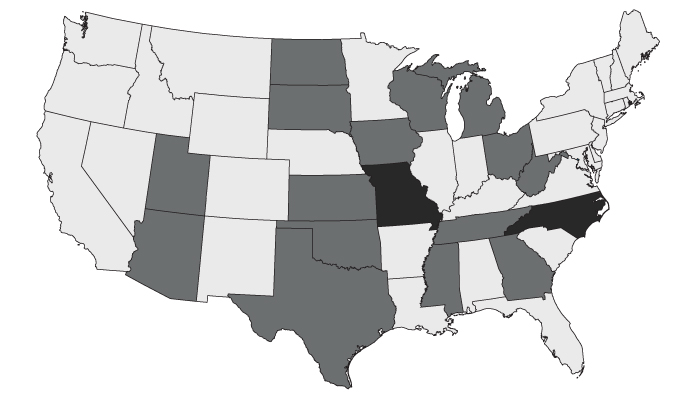 The Garlock bankruptcy proceedings brought to light the fact that plaintiffs seem to tell conflicting accounts about their own asbestos exposure in order to collect from solvent defendants as well as from bankruptcy trusts. As a result, we’re seeing more states passing Bankruptcy Trust Transparency (BTT) legislation in an attempt to bring transparency to the process; so far 15 states have passed such laws.

On May 23, North Carolina became the latest state to pass BTT legislation. Though it has had no more than a dozen asbestos filings per year in the last five years, the state has been a popular jurisdiction for bankrupt proceedings related to asbestos liabilities and, notably, it is where the Garlock proceedings were held.

North Carolina’s legislation is similar to that in the other 14 states in that it requires plaintiffs to disclose to the solvent defendants any trusts where they’re submitting claims. While it’s good to see another state pass BTT legislation, North Carolina has never seen a large influx of filings of asbestos claims. It’s a different story in Missouri …

Unlike North Carolina, Missouri is a hotbed state for asbestos litigation. In KCIC’s 2017 Asbestos Litigation Report, we found the state – specifically the city of St. Louis – consistently has one of the highest volumes of asbestos filings in the country. We also observed that the jurisdiction saw a significant decrease in asbestos claim filings from 2016 to 2017. We hypothesized that the decrease in filings could be due to the Daubert law enacted in early 2016 or the Bristol Myers Squibb ruling from mid-2016.

In short, Missouri would set forth the following guidelines for asbestos lawsuits:

If the new legislation is enacted, it will be interesting to see if asbestos filings continue to decrease in Missouri. Also, we could see significant ripple effects affecting other jurisdictions.

In our 2017 Asbestos Litigation Report, we discussed potential impacts that BTT legislation has on asbestos filings within states where it is enacted. We found strong patterns indicating that the share of mesothelioma claims in states with BTT legislation dropped sharply compared to other states. Using Ohio as an example, we observed that mesothelioma filings there were in line with national numbers until Ohio enacted BTT legislation — when filings significantly decreased. We also noted that nationwide filings did not decrease between 2013 and 2014. Therefore, we surmised that claims that would have been filed in Ohio instead got filed in a different state – likely one without BTT laws. 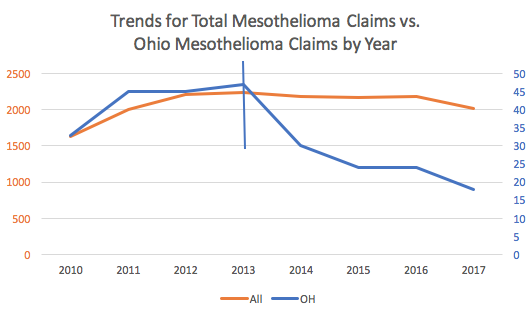 If the new Missouri legislation is passed, and our findings from our study of Ohio claims are any indication, we may see a filing number in Missouri that is drastically different from previous years. Also, claims that would have filed in Missouri may arise in alternate states. Because Missouri sees such a large influx of claims each year, the ripple effect could be an increased number of claims elsewhere.

Looking ahead, we will keep close watch on the filing trends in other states that are considering BTT legislation, as well as those that have not yet started addressing bankruptcy trust culpability. We’ll look to determine how BTT legislation impacts each state’s asbestos filings.

Since the Missouri legislation would allow solvent defendant companies to present alternative exposure to bankruptcy trust products and also confirm the plaintiff has filed with as many trusts as possible, gathering bankruptcy trust information could become extremely beneficial. Even if the legislation doesn’t pass, the solvent defendants would still want to obtain a clearer picture of a claimant’s potential alternative exposures. Compiling and sorting through this information can be very costly and time consuming. That is why KCIC created BEV, our Bankruptcy Evidence Verification tool. We’ve already done the hard work of compiling and sorting publicly available trust information into an online database. The result: BEV provides some level of ‘transparency’ for solvent companies looking to prove alternative exposure in order to keep the bankrupt companies in evidence.

As detailed in a recent post, by allowing defendant companies to search the database on a variety of data points, we’ve essentially put our vast and ever-expanding library of trust information, documents, and exposure source listings within easy reach. With this information, companies should have the resources they need to find potential alternative exposures effectively and efficiently.