3/3/2020 By Nicholas Sochurek and Victor Taylor

A fundamental building block of any insurance claim or coverage litigation is a precise analysis of all the relevant pieces of language in each insurance policy that may be issued.  KCIC has regularly undertaken such reviews, under the direction of counsel, sometimes for programs with hundreds of insurance policies.  Our technologies, products and approach have been written about elsewhere on this blog.

Recently we have undertaken policy reviews for thousands of insurance policies under multiple programs.  While we have a well-honed process and are able to deploy leading-edge technology, this challenge required us to up our game and deploy other management consulting strategies, which we will break down in the blog post. 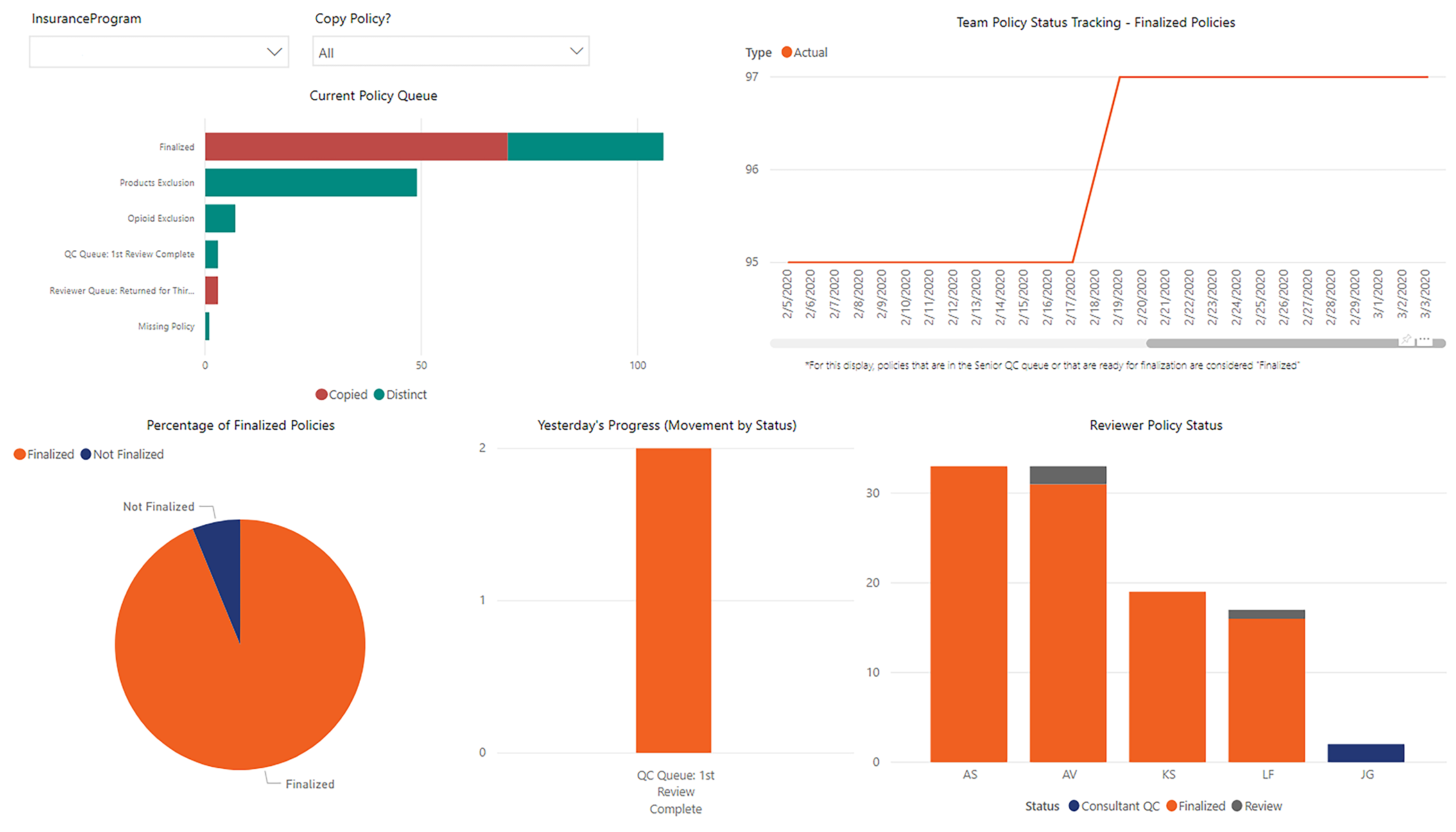 One of the new techniques that KCIC deployed was that of a status tracking dashboard linked to our relational policy database.  Accurately monitoring the progress of a project is crucially important to ensure good work is done in the agreed upon time frame.  In policy review of old, progress was recorded by looking at a spreadsheet with a list of – what was initially believed – all the policies in a review.  Everyone could edit this spreadsheet and add or change policy information.  Version control could be a challenge.  When KCIC received its most recent policy review project, we realized and decided that it was time to develop something better.

The logistical challenge that was presented required us to find a way to quickly and accurately track where each policy was in its review.  The first step for this was to bring status tracking to our database. A set of attributes was created for each policy that could be updated through our data entry user interface during the review itself.  This allowed the team to easily query out each policy’s status at a moment’s notice, find any relevant information about issues that were found during the review, and discover who touched the policy along each step of its review.

The next step was to develop a better way to communicate the overall project status with the consultants and management members on the team.  This led to the utilization of the Microsoft Power BI and Teams platforms.  By feeding live data into a dynamic report, it became possible to analyze weak points and roadblocks in the review.  The dashboard made it feasible to create and track goals for each person on the team and allow people to see the policies in their queue along with priority flags for particularly involved policies.  This dashboard has become the central hub around which policy reviews turns by introducing a transparent and visually informative platform for communication and collaboration to the whole team.

Development of the “Copy Language Procedures”

The Status Tracking dashboard also displays statistics based around another new tool in our policy review toolbox, the “Copy Language Procedures.”  With thousands of policies to review, it became clear that a large portion of the policies would have the same language, particularly if the same carriers wrote the policies within certain time frames. By copying language from one policy to another rather than capturing this identical language in duplicate, analytical efforts could focus on unique language.

KCIC has a large repository of previously coded and approved language from standard commercial liability forms in a library that coders use to grab relevant language during their review. In our most recent review, we took an extra step in developing this library. Since each language review is unique in its requirements, some language might be important for one review but was disregarded in past reviews. This made the language library useful, but not perfect. Coders would still have to identify each new provision in every policy which would result in valuable time wasted when coders and reviewers checked duplicate language for accuracy.

The new methodology makes it easier to identify policies that have identical language and allows the coder to transfer the language, along with all of the provision analysis from a previously verified policy to another.  It uses the language library, but biases towards approved language from the current review so that only the most relevant language is captured. When this method is used, the quality management reviewer is automatically alerted, reducing time spent reviewing that piece of language and enforcing consistency across the length of the review.

Optical Character Recognition (OCR) software is a technology that can identify text in a PDF, allowing the text to be copied to other platforms.  The technology has been around in various forms for years, but the quality of the resulting text could be quite poor, especially for older documents.  Since some of the reviews that KCIC takes on include policies as old as the 1940s, OCR was unreliable, and language was manually reproduced rather than copied in most cases.  Recent improvements in OCR technology have changed that.  Language rarely has to be manually entered, significantly reducing the amount of time spent on manual reproduction.

Between the “Copy Language Procedures” and improvements to OCR software, policies can now be turned into code in a fraction of the time previously required while at the same time improving quality and consistency.

Upper level insurance policies typically do not contain all the provision language of lower level policies but rather incorporate that language by following form to one policy, or potentially to many different policies.  The analysis of which policies contain the relevant language that is incorporated into the upper level policies is a foundational issue in any coverage dispute.  Coverage litigation is typically focused on those relatively few policies that do contain the controlling language.  Coding the correct provisions for an upper level policy manually takes time and requires many levels of review for accuracy.  However, these analyses tend to follow rules, and tasks that follow rules can be automated.

KCIC has created a code that can take the rules that our clients establish by their coverage attorneys and programmatically update the coding for these follow form policies. The code looks at each policy that the upper level policy has been coded as following and updates it accordingly. When provisions conflict, the codified rules will dictate which provision value presides. The result is a consistently coded coverage block. It also enables different theories of follows forms analysis to easily compare in the coverage analysis.

How often we will be asked to undertake a policy review of such magnitude in the future is unknown, but we will incorporate these techniques in all our future reviews not only to keep them efficient, but to keep our consultants stimulated and engaged.