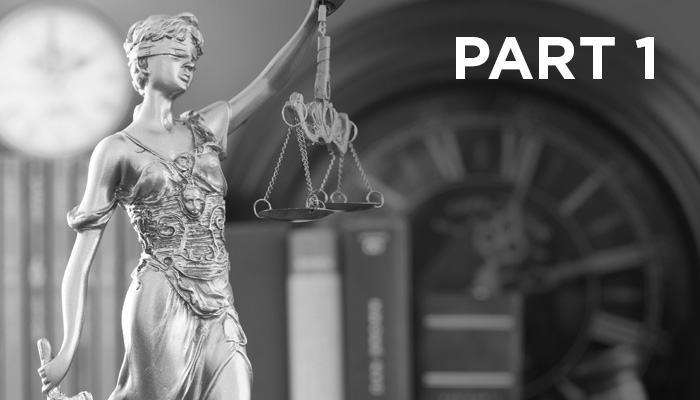 Recently, one of KCIC’s clients (the plaintiff) and their legal team went to trial regarding this exact issue.

In the preceding weeks, our team worked diligently to review, code and create reports and charts for language provisions found in more than 250 policies, all to be used at this phase of the trial. We do this kind of Policy Management work all the time as part of our Consulting service — helping clients get a handle on all their historic, comprehensive general liability insurance policies.

We also provide Litigation Support, and in this case, Counsel brought me to trial for two main purposes. The first was to provide the ability to create new reports and analysis on the fly. The second was to electronically navigate the many policies, reports and charts in court at the request of counsel or the judge.

As we entered the courtroom, the tension between plaintiff and defense was palpable albeit professionally amiable. All rose for the honorable judge, and the chess match began with the plaintiff’s opening statement.

This phase of the trial revolved around the issue of whether the excess insurance policies attached after horizontal exhaustion of the entire primary insurance layer. In other words, did every one of the dozens of primary policies need to be fully paid, or held liable to pay, before the excess policies were liable to pay their policy limits. Because few claims trigger them, some of the very early primary policies may have unpaid limits decades after later ones exhaust. The effect of this issue can be to greatly delay, potentially forever, the day on which the excess coverage begins to respond to claims.

The defense represented multiple different insurance carriers. They asserted that their clients were not liable to pay until at least all of the primary coverage was exhausted. KCIC’s client (the plaintiff) asserted that the excess insurance carriers owe them for losses paid that should have been covered by the insurers’ policies — and that horizontal exhaustion of the primary was not necessary. They argued this was the case because the primary policies for periods entirely before or after an excess policy’s coverage period were not specifically “underlying” the individual excess policy and were not listed in the limits of that policy’s schedule of underlying insurance.

Many provisions of insurance policy language and insurance law concepts were discussed throughout the trial. I will touch briefly on three of the interwoven, pivotal arguments:

Contra proferentum is Latin for “against the offeror” and is a precedent principle in contract law. When used, it means that in the event of ambiguous or unclear language in a contract, the interpretation should be against the interests of the party that drafted the ambiguous language (in this case the insurer). In insurance law, this rule typically works to discourage the addition of vague language by the insurer to the detriment of the insured. Contra proferentum was an important concept in this trial, because the matter of horizontal exhaustion depends on language in the policies and whether or not they clearly and unambiguously state that the excess policies require all of the primary policies to be fully exhausted before assuming liability.

The plaintiff argued that contra proferentum should be used in the interpretation of the defense’s major theme, which relied upon two common language provisions that the plaintiff believes are ambiguous. The defense attempted to use “Other Insurance” language and “Follow Form” language within the policies to construe that the policies clearly state the necessity of primary horizontal exhaustion.

What for my next post on this topic, when I will tackle two of the main issues litigated at trial: “other insurance” and “follows form”.