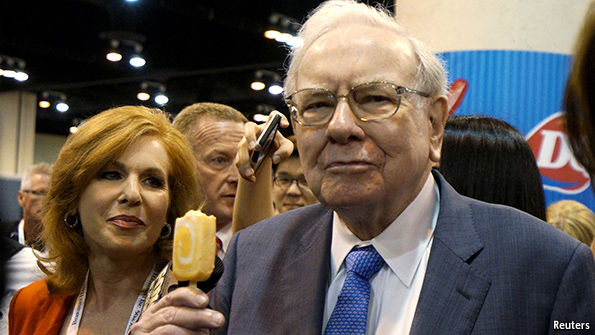 This article appears online and in the 1/28/17 print edition of The Economist, in the Finance and Economics section.

IT IS a niche market, but a big one, and it is increasingly dominated by Warren Buffett’s Berkshire Hathaway. On January 20th its reinsurance subsidiary, National Indemnity Company (NICO), agreed with American International Group (AIG), a big insurer, to acquire excess losses on old insurance policies. In one of the largest such “retroactive reinsurance” deals ever announced, NICO will be on the hook for four-fifths of all losses above $25bn, up to $20bn, in exchange for a payment of $9.8bn now. The deal comes just a few weeks after a similar deal giving up to $1.5bn of coverage to Hartford, another American insurance giant.

For much of the 15 years since the term retroactive reinsurance came into use, Berkshire, through NICO, has been at the forefront. The structure allows insurers to rid themselves of so-called “long-tail” exposures, ie, claims that may come in years or decades after policies were written. Often, they cover long-term environmental risks like pollution, or asbestos-related disease, where workers may fall ill many years after exposure. In the largest previous deal in 2006 NICO provided reinsurance coverage worth $7bn for asbestos risks to Equitas, a vehicle set up to bail out the Lloyd’s insurance market in the 1990s.

On asbestos, for instance, Jonathan Terrell of KCIC, a claims-management consultancy, reckons Berkshire’s accumulation of legacy liabilities is not just the largest in the industry today, but the largest it has ever seen.

Such deals can be lucrative for both seller and buyer. The insurer caps its liabilities and frees up capital (AIG plans to return some to shareholders). And for Berkshire, such deals are an important source of “float”. Insurers enjoy a form of financing that is in essence free, because premium income, including reinsurance payments, comes in long before claims have to be paid out. In September 2016 Berkshire’s float was $91bn. Unlike other insurance companies that invest in a conservative portfolio of bonds, NICO’s money is deployed to buy Mr Buffett’s latest acquisition targets. The high investment returns that result can, in turn, weather greater insurance losses.

Lawyers who have represented insurance claimants in past cases worry that this kind of deal threatens policyholders’ interests. Since the buyer has no direct relationship with them, it may be more likely to delay and quibble about payouts, to maximise its own financial gain. In most Berkshire deals, claims management has been handled by its subsidiary, Resolute Management, which has faced a number of lawsuits in recent years. The two most recent deals, with Hartford and AIG, are different, with the selling insurers explicitly retaining responsibility for claims management.

A broader worry is concentration of risk. A risk manager who had diversified by taking out insurance with a variety of different companies might find that all of his firm’s long-tail risks now sit in just one pot: Berkshire. On asbestos, for instance, Jonathan Terrell of KCIC, a claims-management consultancy, reckons Berkshire’s accumulation of legacy liabilities is not just the largest in the industry today, but the largest it has ever seen. That’s a long tail with a dangerous whisk.