In asbestos litigation, a plaintiff’s date of first exposure (“DOFE”) to asbestos is a crucial data point. DOFEs can help defendants discern to which products a plaintiff may have been exposed and determine which insurance policies may be triggered to reimburse defense and indemnity costs arising out of the case.  Logically, one would think that the DOFE would, on average, move forward one year for each year that passes.  This is not what is observed in the actual filing data. The data shows that the average DOFE moves forward (“creeps”) much less than one year for each year that passes.  In our last Asbestos Litigation Report, KCIC analyzed the average DOFE creep per file year for the years 2017 to 2019 using the earliest primary exposure to asbestos from the complaint. Due to the amount of interest that was shown since the publication of that report, we have taken a deeper dive into DOFE trends. In this blog post, we will look at DOFE trends for all filings (including and excluding secondary exposures), as well as differences by gender and by disease type. It is important to remember that this analysis, like that in our Asbestos Litigation Report, considers only the complaint DOFE and trends for an individual defendant will vary depending on plaintiffs’ exposure to that defendant’s products and/or premises. However, trends in complaint DOFE movement are a good indication of the overall trends in this litigation.

In this expanded analysis, we looked at filings back to 2014 to better understand how DOFEs are changing. When looking at the movement in average DOFE by year of file date for all filings with exposure data in the complaint, we see that for every file year, the average DOFE advances by about 3 months.  When secondary exposures (e.g. exposure through washing the clothes of a parent or spouse who was directly exposed to asbestos) are removed, we see the average DOFE advances by almost 5 months per file year. In other words, while the DOFEs are moving later in time, they are not increasing at a one-year to one-year rate with dates of filing. As expected, the advancement of the DOFE is slowed down by the secondary exposures which tend to occur earlier than a plaintiff’s direct exposures.

When we exclude the secondary exposures and further break down the data between male and female plaintiffs, we see different trends in average DOFE movement become even more pronounced. Generally, there are more male claims due to the nature of asbestos related work and gender norms when asbestos was used. Females were less likely to be working, especially in the same fields as men, so their primary exposures generally occurred later than that of males.  The chart below shows the trend in average DOFE for primary exposures over the past 6 and a half years for males and females. Between 2014 and 2020, female DOFEs were, on average, almost 3 years later than male DOFEs.   Our analysis found that the female DOFE for primary exposures to asbestos is moving forward at double the rate that it is for males. Overall, female DOFEs have moved by just over 4 years over the last 6.5 file years (or 8 months per file year) while the male DOFE has only moved 2 years over the same time period (or 4 months per file year).  This difference in how fast the DOFEs are moving forward translates into a wider disparity between male and female DOFEs in 2020 filings as compared to 2014. When looking at the actual data, the average male DOFE for 2020 filings occurred in August 1962, while the average female DOFE occurred in January 1968, a 5-year difference compared to the 3-year average difference seen when considering all data in 2014 – 2020 to date. 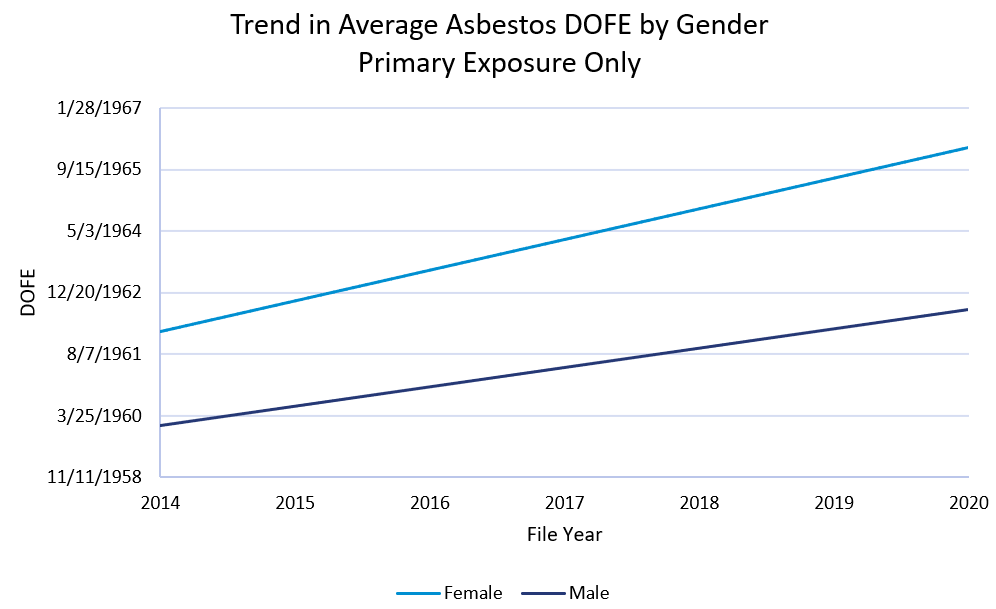 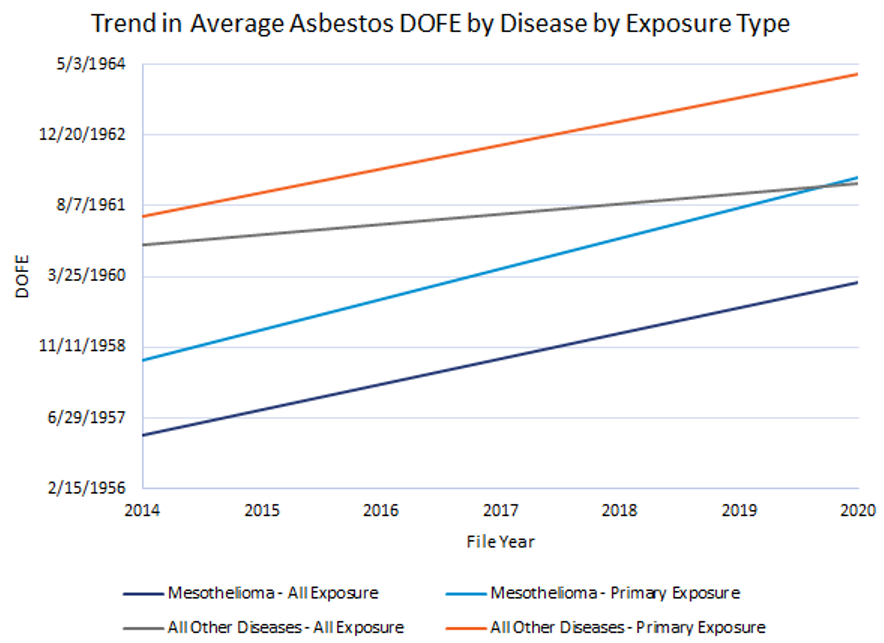 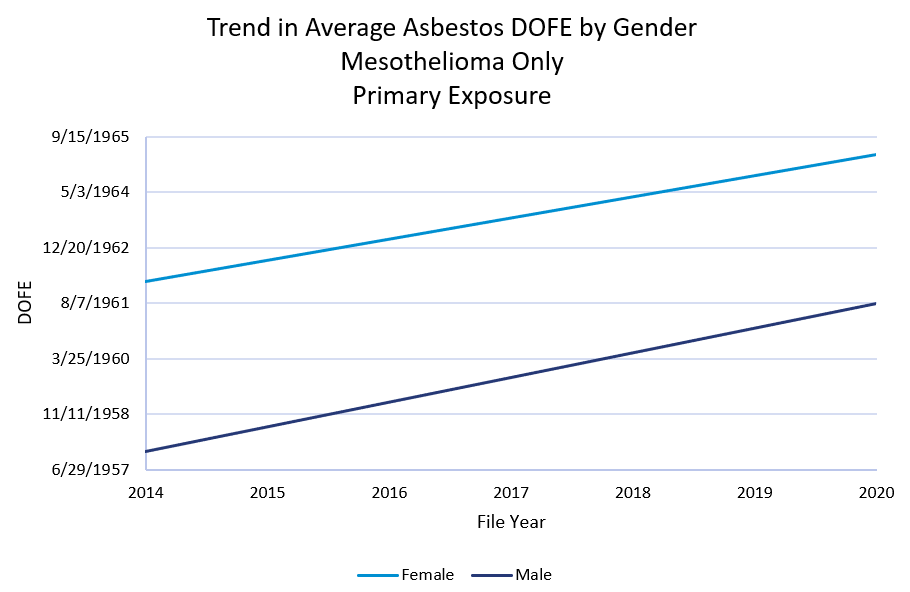 In conclusion, the average DOFE for asbestos claims is not creeping forward as quickly as one would intuitively expect – it does not advance in a one-year to one-year ratio with the year of filing. This is an important observation indicating the continuation of asbestos filings farther into the future. In addition, it is important for insurers because their policies will continue to be triggered for a longer period of time than would be the case if the ratio of DOFE creep were 1:1. KCIC will continue to monitor the DOFE creep trends and continue to report on any findings.